There have been many challenges that we met during this process. Some of these are as follows:-

The technology was not available to control the flow of hydrogen and was the stumbling block for everyone wanting ot take advantage of the properties of hydrogen in an internal combustion engine.

Our specialists designed a logic based controller and software to create a Control and Delivery System for hydrogen gas injection that is used as a catalyst in an engine.

This is ground breaking new technology which is now driving our Research and Development team to investigate and develop associated systems and improvements.

The transport industry and regulators were not familiar with hydrogen when used as a fuel catalyst. We discovered that Hydrogen was not even listed in the Australian Government’s Gas Act as a gas. The properties of Natural Gas and Hydrogen are similar – they are both flammable gasses, rise vertically in the air when released and have similar system pressures. As such, the system designers chose the guidance of the AS/NZ 2739 Standard as the basis for the system design. Hems Global have actually exceeded the safety requirements of this standard!

CFS International have certified the HEMS System installation as compliant with the AS/NZ 2739. This has been accepted by the Australian (NSW Roads and Maritime Services) Road Transport regulators as an approval to operate the vehicle on Australian roads. 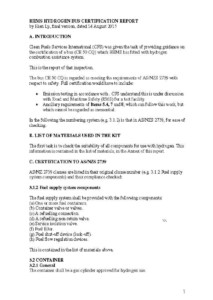 Some component manufacturers promised functionality which was not, in fact, there.

We tried many different manufacturers of the components to be used in our system. There were many failures, either by not meeting our expected standard in the first place or failure when in test.

We finally found component manufacturers that delivered what was promised. We finally had components that were consistent in quality and met the required standards.

As mentioned earlier, as the Australian Gas Act did not recognise hydrogen as a gas, there were no applicable standards available for hydrogen.

There were generic International standards and Australian Standards were only available for Liquid Petroleum Gas (LPG) and Compressed Natural Gas (CNG) in Vehicles. As Hydrogen and Natural Gas have similar properties, we used the CNG Standard (AS/NZS 2739) as the basis for our design. It is to this standard that our installation has been certified .  A vehicle fitted with the HEMS Diesel Reduction System is therefore permitted to be operated in the road.

No Australian Design Rules are compromised and all standards are complied with.

There were variations of fact and fallacy regarding hydrogen.

There is a Hydrogen Facts Sheet available online, which addresses public opinions and concerns.

The HEMS system has been designed to minimise risks of leakage.

Other systems may be available that do not have an accurate hydrogen flow control mechanism. These do not deliver consistent results. The Hems system uses a patented control and delivery system to ensure consistency of hydrogen flow.